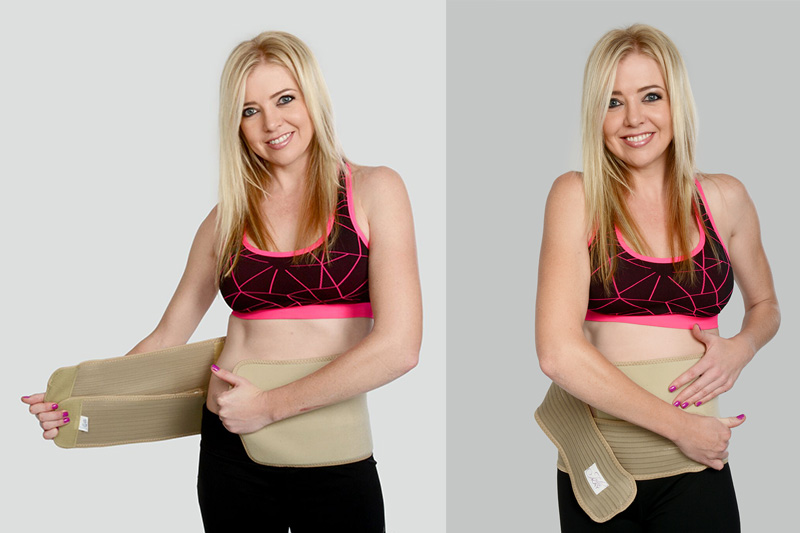 Post-birth abdominal binding has been practiced by women for centuries. The main theory behind binding is to return a woman’s abdominal and pelvic region to its pre-pregnancy state as soon as possible after birth.

Primarily through compression, binding aids in returning the internal abdominal and pelvic organs, muscle and skin to the pre-partum state. As well as reducing the abdominal bulge, binding aids in improved back and pelvic support, reduced back and pelvic pain, posture and balance correction, reduced C-section pain, increased circulation, abdominal muscle activation, reduced incontinence and gastrointestinal complications, as well as emotional and psychological support.

After delivery it is a common misconception that the post-birth abdomen or stomach will be flat and look as it was before conception.

During pregnancy the uterus stretches to a large size, as does the abdomen, surrounding musculature and skin, to accommodate the growth of the foetus and placenta, as well as increasing blood and fluid volumes. Once the baby and placenta have been delivered most often a large, protruding stomach still exists.

During the first few days and weeks after birth the stomach will start to reduce in size as the organs revert to their correct orientation, the uterus contracts and the excess fluid is absorbed.

Abdominal binding enhances this process through the compression of the abdomen, reducing the size of the bulge, as well as providing support for what feels like a very empty, loose, soft and enlarged stomach. 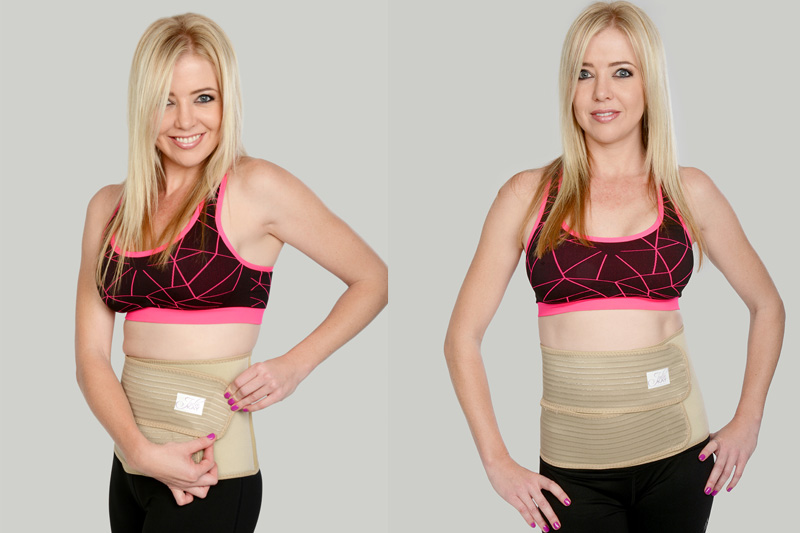 The incidence of back and pelvic pain is high during pregnancy and may continue after birth.

This is caused by the increasing weight of the abdomen, postural and balance changes, as well as the hormones produced that prepare the body for birth. The pregnant body secretes hormones which adapt the body to allow for the growing foetus and the impending delivery. Relaxin is a hormone secreted that softens the ligaments, tendons, cartilage, muscles and joints in the body which allows for the stretching of the pelvic joints and hips during delivery.

Relaxin also relaxes the smooth muscle in the uterus to accommodate growth and expansion. In turn it influences the entire body causing cartilage and ligaments to soften, muscles to relax and joints therefore become more prone to injury and pain. Joints in the spine and pelvis become increasingly vulnerable to injury and pain as their stability is further compromised due to this effect of relaxin.

Abdominal binding shortly after birth provides extra support to the back, pelvis and abdomen, alleviating these symptoms and preventing recurrence of back and pelvic pain after birth.

Breastfeeding posture after birth may also contribute to backache as this is often not a posture that women are used to performing. It can lead to upper back, neck and shoulder pain and spasm throughout the spine musculature. Abdominal binding supports the back and leads to a more efficient, supported posture while breastfeeding. This reduces the pain felt during long periods of sustaining the feeding posture and the uncomfortable effects felt afterwards. Oxytocin, another hormone produced during pregnancy and birth, also encourages shrinking of the womb. During breastfeeding oxytocin is further released to contract the uterus and enables it to return to its normal size. These contractions can be strong and painful and binding helps reduce this pain due to the compressive, supportive force it offers.

During pregnancy the body’s centre of gravity changes due to the changing weight distribution. The centre of gravity is basically the centre point where your body’s weight needs to be concentrated to achieve balance during every day movement. The pregnant body’s increasing weight as well as the ‘pulling forward’ of the heavy abdomen, causes postural changes. The back and pelvic region, as well as the lower limbs, need to accommodate to maintain effective posture and balance.

This can lead to back, sacral and pelvic pain which are common complaints of pregnancy. Abdominal binding after birth corrects posture, reduces back pain and alleviates pressure on the pelvis and pelvic region. Through correct spinal alignment, effective balance is achieved much faster and the added abdominal support reduces the gravitational pull of the enlarged abdomen on the spine. This allows for optimal posture and balance and the return to normal function and exercise is hastened.

C-section is invasive abdominal surgery and brings with it many more challenges than a natural delivery. The incision site is often largely painful and is in an area where constant movement takes place, as the abdominal muscles are active for almost every movement we make. C-section patients are encouraged to support the incision site with a pillow or their own arms when coughing, sneezing, laughing or doing any movement that will cause engagement of the abdominal muscles. The abdominal binder supports the incision by providing compression over the cut. When the abdominal muscles are activated the incision is supported by the binder, so the movements cause much less pain at the site of the cut. Normal activities and movements are made much easier and are less painful due to this compressive support. The sooner the binder is fitted to the C-section patient the faster pain relief is acquired and normal movement can return.

During pregnancy the expanding uterus, abdominal and pelvic areas cause weakening of the abdominal muscles as they need to stretch to accommodate this growth. The hormone relaxin will also have a relaxing, lengthening effect on the muscles, adding to their weakness. The core abdominal muscles, which are responsible for support, strength and correct biomechanics, are also negatively affected. This muscular structure becomes compromised during pregnancy which can continue after birth if not activated and strengthened. Possible injury and pain of the back, abdomen and pelvis may occur as the protective function of this muscle group has diminished. Diastasis recti, where the large abdominal muscles may split, is an extreme result of this weakness and internal pressure.  Abdominal binding assumes a similar role to these muscles in their optimal state and provides support to the front of the abdomen, especially after a C-section or diastasis recti.

The binder also aids in stimulation of the abdominal muscles as the pressure it exerts facilitates their desire to activate, contract and strengthen. It is recommended that a simple abdominal exercise program is prescribed along with the abdominal binding to return and enhance the strength and effectiveness of these principal muscles. The importance of regaining abdominal strength after birth is paramount.

The hormonal effects of relaxin as well as the weight of the abdominal and pelvic contents can lead to varied degrees of pelvic floor muscle weakening which may result in incontinence. Constipation and haemorrhoids may also develop due to this weight and pressure. Abdominal binding reduces the heaviness and the pressure that the pelvic floor muscles and gastrointestinal organs are under, which alleviates these symptoms and ailments. Binding in conjunction with a simple pelvic floor exercise program is recommended to return to satisfactory function.

Women often describe a sense of emptiness and loss after birth. The vehicle that housed their helpless baby is now no longer needed and the feeling that the life once inside them is now gone can be very emotional. The feeling of a baby in utero is that of pressure and fullness and the abdominal wall feeling tight.

Abdominal binding is a strong compressive force on the abdomen and back which mimics the same feeling of pressure that a baby in utero does. It is noted that women who have felt this loss or emotional unrest feel much more emotionally calm and at ease with this similar pressure created by the binder, as it mimics the feeling of their child. This has also been shown to have a positive emotional and psychological effect on women who have miscarried or lost their babies.

The positive effects of abdominal binding on the psyche extend further than that of emotional support. Most women place large importance on the shape and size of their bodies. The figure and weight altering effects of pregnancy can have a massive effect on self confidence and how women view themselves. The need to return to a desirable shape can be further influenced by societal pressure and expectation. Abdominal binding reduces the abdominal bulge and creates a sleek, slim figure gives women a new-found confidence in their post-pregnancy body shape. The appearance of a flat or smaller stomach is also a major confidence boost and the ability to fit back into one’s clothing is a great achievement.

Abdominal binding after birth has endless beneficial effects. It speeds up recovery of the postpartum body as well as optimizes postural, abdominal and pelvic support causing a reduction in pathology and pain. Circulation is enhanced which leads to reduced swelling, incidence of blood clotting and improved lactation. The emotional effects cannot be discounted as women feel a lessened sense of loss as well as a heightened confidence in their body shape.

How can we help?